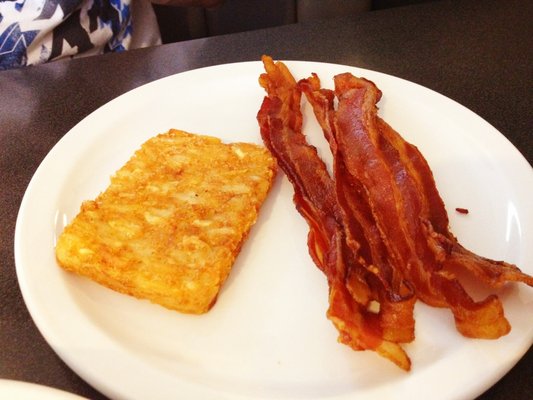 1. Cook the potatoes in a large pan of boiling water for about 5minutes (they should not be overcooked)

3. Cut the potatoes into smaller strips or cubes

4. Fry the bacon over high heat in a large frying pan until the fat runs free and the bacon is crisp

5. Remove the bacon from the pan

6. Add the butter to the bacon fat in the pan and heat until the butter bubbles

7. Add the prepared potatoes and half of the chopped bacon to the fat and season with salt and pepper

8. Press the potatoes down firmly with a slice (the potato cubes or strips will stick together to form a large, flat potato cake)

9. Reduce the heat slightly and continue to cook while shaking the pan to prevent the potatoes from sticking onto the pan

10. Continue to cook for about 15minutes or until the potatoes form a crisp and golden crust

11. Carefully remove the hash browns from the pan and place them on a separate plate

12. Sprinkle the hash browns with the remaining fried bacon pieces

13. Cut the potato cake into generous wedges and serve immediately