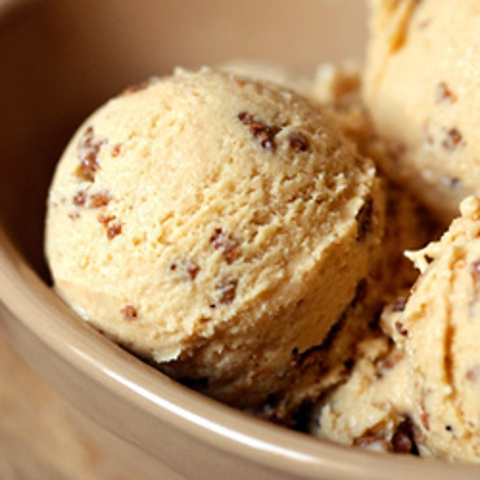 1. Turn the refrigerator to its coldest setting an hour before preparing the ice cream

2. Blend the vanilla sugar and the cream together and whisk the mixture until it is fluffy

3. Spoon the mixture into a polythene container, cover it with a lid and place it in the freezer

4. When the mixture has begun to set around the edges, remove it from the freezer and stir the sides into the middle to prevent ice crystals from forming (repeat this twice during freezing)

5. Reduce the bread to fine crumbs and mix with the brown sugar

6. Spread the crumbs on a lightly oiled baking tray and put this into the center of an oven preheated to 400F (200C)

7. Leave in the oven until the sugar caramelizes and the crumbs are golden brown, stir them occasionally

8. Leave the mixture to cool then break it up into crumbs again with a fork

9. When the ice cream is nearly set, turn it into a chilled bowl

10. Beat with an egg whisk and stir in the crumbs

11. Spoon the mixture into the ice trays and return them into the refrigerator while covered

12. Freeze the mixture until firm