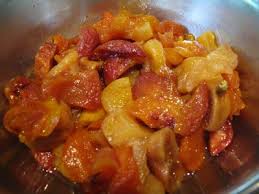 1. Cut the dried fruits if the pieces are very large

2. Place the fruit in a large pan with the cinnamon stick and the cider

4. Cover the pan, lower the heat and cook gently for about 15minutes without letting it boil

5. Remove the pan from the heat and let it stand for at least 1hour

6. Return the pan to the heat and add the rum

7. Heat until almost boiling then transfer to a wide-necked vacuum flask

8. Remove the cinnamon stick before serving